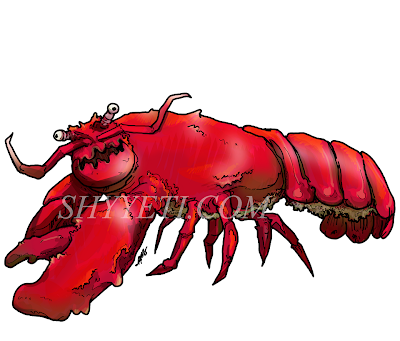 ZOMBIE LOBSTERS AND MORE ABOUT ARE WE THERE, YETI!?!

What, you may ask - is this lobster doing on our page, this week? It's Rocky Lobster, of course - from my poem, WHAT'S UP WITH ROCKY LOBSTER?! Although Rocky's poem doesn't see the light of day in one of my books until later in the year, this is some artwork that will be used to illustrate the piece which I would like to share with you. It's by Adam M Botsford and will eventually see the light of day in my NOT AS SHY AS I WAS... collection, which will be released later in 2013. You can read the Rocky's poem here on this blog at: http://thedaffypoet.blogspot.co.uk/2012_07_22_archive.html

There's also a video of me reading the poem at: http://youtu.be/HKaeruG8N8Y

Adam's blog's are at: http://adammbotsford.blogspot.co.uk/ and more specifically: http://adambotsford.com/post/40442865091/wip this later link shows some of the processes that were used to bring the lobster illustration to life. Ironic as he's a zombie lobster - wrong turn of phrase, possibly!?! :)

Moving on, this week and for the next few posts until the new book, ARE WE THERE, YETI is published early next month, I intend to discuss in a little more detail the contents of my new collection, - breaking it down into short stories, prose pieces and verse...

The book includes 100 items and over 80 of them are either short stories or prose pieces. This week we'll be looking at those pieces that definitely count as extended short stories; those that are over a couple of pages... I'm not going to go into great detail - but I thought I'd share with you briefly what each piece is about...


ALL SWEETNESS AND LIGHT

This story is about a mysterious robbery up in leafy Muswell Hill... We learn who the robbers were and whether or not they get away with their crimes.

This one's about a disappearance, a detective and an apartment that holds a horrific secret...

BREAKING INTO THE JAIL

This piece is about squatters moving into a mansion in Belgravia , only for them to quickly discover exactly why it has been left standing empty for so many years...

A CUP OF SUGAR

This story's a quirky piece about a lady who spends her summer's in a log cabin in a forest in Oregon and how she deals with the rather demanding neighbours that she encounters there...

This one's about some pranksters at Halloween who might just have bitten off more than they can chew...

IN THE LOCKER NEXT TO MINE...

This story is a chilling tale of what happens when you find that a supposedly empty space is no longer quite as empty as you first thought...

A visit to Orange County Fair brings about a macabre turn in the life of one young courting couple - and time begins to fly...

This story indicates why one should never live rough in Los Angeles; let alone visit the Hollywood letters after dark...

A SHADOW OVER COVE

La Jolla Cove is home to seals, pelicans and one rather hungry shadow that lives amongst the rocks...

THERE ARE NO RULES...

This story is set in a dining club where diners are encouraged to let their eccentricities roam free...

VIEW FROM A FALLEN OAK

This story is about a man who witnesses a murder whilst climbing a fallen try and how exactly he chooses to deal with the matter...

Next week we start to look at some of those shorter prose pieces contained within ARE WE THERE, YETI!? By then I hope I'll also be a little closer to having a new video to share with you, until then - have a good week; more soon... 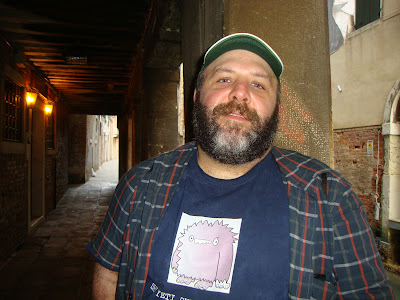