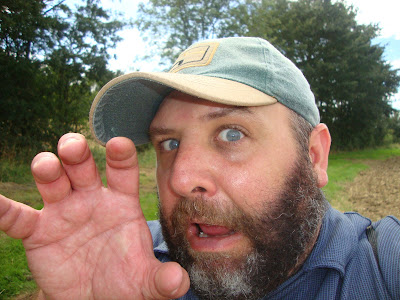 Well, I'm glad to be able to announce this week that there is a new SHY YETI ON LOCATION episode up on both Youtube and Vimeo. It's our first in over a month, so I hope it's worth the wait! It was originally filmed as our Halloween episode, but SHY YETI'S HAUNTED KITCHEN got there first. Here's a bit more about the video which was filmed around the South of England during August 2012... The first poem is about three years old and the other two are ones that I've worked on in recent months for next year's NOT AS SHY AS I WAS collection.

SHY YETI'S SPOOKYCREEPY SHOW was originally going called SHY YETI'S HALLOWEEN HOO-HAA and was going to be this year's Halloween episode, but then SHY YETI'S HAUNTED KITCHEN jumped in first. Anyway, the finished episode is another horror-themed show and included three poems, three (count 'em!) yeti dances and a lot of silliness. The poems are THAT OLD BLOOD MOON, SHAVING WEREWOLVES and HELLO! HELLO! I'M HALLOWEEN! Special guests in this episode include Dominic McCauley, Andrew Trowbridge and Lisa Parker. Camerawork by: myself, Dominic and Harry Fulton. Music is by Spooky Yeti and Luca. All content in this episode is Copyright Paul Chandler 2012. Coming soon: More live episodes, more Sutton Park (hopefully) and our Christmas episode!!

So, what else do I have to tell you?

I'm hoping to be able to release ARE WE THERE, YETI!? next week... I'm just putting the finishing touches to it now and hoping to send it off to Lulu.com by this Friday. If it's ready then that's one of the things that I'll be posting about next week.

As some of you may recall, the follow-up to ARE WE THERE, YETI!? is called NOT AS SHY AS I WAS and I've been performing a lot from this collection during 2012. I've not yet begun proofing this collection at all yet, but I will be doing a post or two about this book in the next few weeks - including releasing the contents list so you can see a little more about what that collection contains.

Next week we'll be doing an update on the ratings for the videos that I've posted on Youtube and Vimeo as a run up to announcing as the first post of 2013, which of the 2012 videos received the highest ratings... It's always a little unfair as, obviously, some videos are newer than others - although this has been quite a weird year in as much as I've had far more views for the films in 2012 than in previous years. Many of the films from the first half of this year have more hits than many of those films that have been up since 2010! I may also be doing a mini review of the year, as well as posting up a number a video from last month's THIRD TIME LUCKY show, at The Poetry Cafe.

That's it for now,

PS Here's a drawing that will appear with the poem SHAVING WEREWOLVES when it is eventually published in my NOT AS SHY AS I WAS collection. It was drawn by Adam M Botsford and you can see more of his work at: http://adammbotsford.blogspot.co.uk/

The specific post about this drawing is at: http://adambotsford.com/post/37163113895/here-is-an-commission-for-paul-chandler-check-out 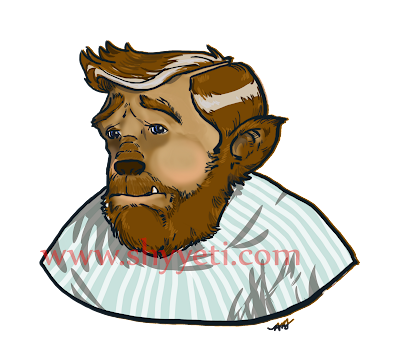