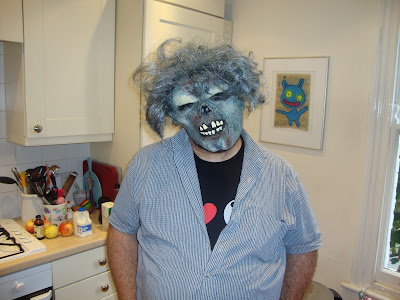 HOT OFF THE PRESS: THE MORNING AFTER HALLOWEEN...

Here's a little extra reading for you, this week - as it's topical...

PS Check out my SPOOKYCREEP posts on Twitter @SHYYETI  Although there are only two, so far!!

THE MORNING AFTER HALLOWEEN

There are sad looking zombies skulking around by the tube station opposite where I live, this morning and what appears to be a werewolf in a tank top.


Seriously, orange and pink stripes? I guess it matches his eyes...


Something makes me think that Halloween didn't go so well for them this year.


This is the hangover of all that blood lust.


People just weren't going out last night. It was too wet and nobody “invited” the vampires in; not even the sexy ones.


Nobody was feeling charitable or maybe they've finally wised up.


Today there are blood-stains on the wall by the boards where the train-times are listed. How long will it take them to clear up that mess?


Last night a poltergeist went crazy out there, spinning about amongst the returning commuters. It seemed like they were out there screaming for hours, but in the end I think the poltergeist was screaming too.


I called The Police after about twenty minutes, but they never came so I watched The Sound Of Music in just my vest and pants. I made nachos and cheese too, boy were they good.


It's kind of quiet now. Yet even through the double-glazing, I can hear one of them crying.


I'm thinking that it's probably that old vampire woman that I saw sitting on the swings in the Park as I came back from the post office around dusk yesterday.


I presumed I’d still be safe at that time of day, but I think a lot of that lot have forgotten the rules – it’s as if those old conventions about sunlight, garlic and crosses no longer work. I saw a werewolf with pierced ears last week – they were actually made from silver bullets.


I stared at her just that little too long and she turned into a bat right in front of me.


She flapped lethargically in my general direction, but I just walked faster.


In the end I think she was disorientated and got caught in some netting that the Police put up over the crime scene at the weekend. Did you hear about that?


Apparently they put the netting up to cover a pair of statues that suddenly showed up. Rumour has it that two gorgons were arguing over a man or a cigarette or maybe both and they ended up turning one another to stone.


Really, the monsters just couldn't get it together this year...


Even the yeti that used to run the corner shop has sold up and gone back to whatever mountain he grew up on.


But you know what, I think our days are numbered, that the night creatures will rally back.


Because it’s weird… It’s like things are changing… I mean, yesterday in the park I presumed I’d still be safe at that time of day, but I think some of the supernaturals have forgotten the rules – they’re not scared any more; nothing has the same effect. It’s as if those old conventions about sunlight, garlic and crosses stopped working.


I saw a werewolf with pierced ears last week – with studs actually made from silver bullets.


I can still hear that vampire woman, she's fluttering about in the loft space somewhere above my head. It's probably time I did the decent thing and put her out of her misery; the ladder to the attic works – I oiled the mechanism no more than a month ago.


I could be up there in a moment; because I won't be able to relax if she keeps sobbing like that all day. I'm doing it for her benefit... For my benefit. Now... Where's my stake?


Sure, she'll be scared when she first sees me, but then glad in the end that I found her and helped her out of her misery...


Next Halloween things may work out better for them – and then where shall we be!?
THE MORNING AFTER HALLOWEEN is Copyright Paul Chandler 2012 and will appear in one of his collections during 2013.
Posted by Paul Chandler at Thursday, November 01, 2012 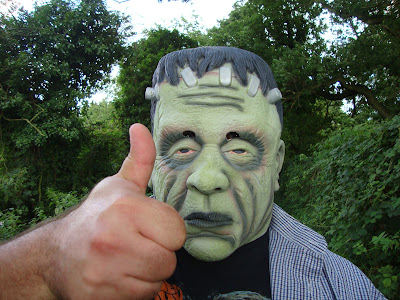 This week we're celebrating all things creepyspooky and that means that we also have a few treats in store! The next couple of posts may be slightly shorter than usual, as there is another overseas location trip coming up, not to mention the next Poetry Cafe show, but I can assure you that there is still a lot to keep you distracted whilst I'm busy!

First up we have a new film to unveil, the first of two episodes that I hope to post up this week - it's called SHY YETI'S HAUNTED KITCHEN...

This is the first of two Halloween films released this year for the SHY YETI ON LOCATION series. This first episode goes out in time for the spooky day itself, whilst the 2nd episode may be a tad belated because it needs a little extra time to complete. That second episode (coming soon!) contains the usual amount of silliness, poetry and yeti dancing, whilst SHY YETI'S HAUNTED KITCHEN is really less poetry, more silliness and even more cooking! Basically it's all about a certain yeti cooking Halloween biscuits and all the typical chaos that you might expect from that! There is also some rather lovely footage of some deer in a Park. This episode was filmed over the weekend of the 20th and 21st October 2012 in both the Hampton Court and Vauxhall area. The film stars Paul Chandler and Dan Hodges with camerawork also from Paul and Dan, but also with a lot of help from Barry Dunkley and Toby Warburton. Music is by Spooky Yeti and all content of this video is Copyright Paul Chandler 2012. A big thank you to all who helped out with the making of this crazy instalment!

Please Note: Although it's introduced as a mini-episode, that bit was recorded before the actual cooking footage and the finished episode ended up at almost 12 minutes!

This weekend I was working on another new SHY YETI ON LOCATION (S.Y.O.L.) episode, this one being the Christmas Special, which I intend to record material for between now and the first week of December; along with what I also intend to film whilst in Venice... I'll need some time to edit it, you realise! This weekend I was filming back down in my home town of Salisbury and recorded the poem LOOK! I'M NO SCROOGE, which has previously only been available as part of one of the Radio Wey episodes. I also recorded a couple of other scenes in my parents loft, where I am trying to locate Christmas decorations! I am hoping that filming for this episode will also take place in Derby in early December, not to mention also whilst I'm away. As many excuses as possible to get Venice into future episodes!!

So yes... Next week, I'll be looking ahead to my trip to Italy and I'll be releasing the 10th anniversary edition of THIRD TIME LUCKY in time for the next Poetry Cafe show on Friday 16th November... I'll also be sharing a poem from that collection and telling you a bit about the diary that I hope to be keeping whilst I'm overseas.

We finish this week with a very new poem for Halloween - it was written over the last week or so, on my Blackberry, whilst commuting into work and is entitled ARE THEY AWARE I'M A WEREWOLF? A first draft of the first verse and chorus of this piece appears in the new SHY YETI episode, but I guess I'll record a full version - possibly for my half-completed EPISODE WITHOUT A THEME 2 edition of S.Y.O.L. which needs to be completed at some stage.

If all goes to plan then I'll be posting next week's post on Monday, before I head off - and with a bit of luck the other Halloween episode will be ready by then too; if not then it'll be up by the time I get back! I'll do my best!!

PS We now have well over 14,000 hits on the MRSHYYETI Youtube channel at: http://www.youtube.com/user/MRSHYYETI! Not to mention all the hits that we have on the Vimeo one at: https://vimeo.com/shyyeti Thanks all again for watching! 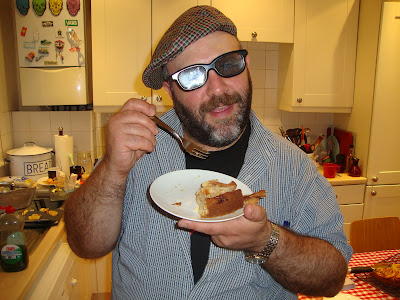 ARE THEY AWARE I'M A WEREWOLF?


There are many questions, folk ignore!
Questions no-one cares to ask...
I'm surprised that no-one's freaking -
Or has taken me to task!
For they must have heard my howling -
In the garden late at night!
They must have seen my furry ears -
But I guess they're simply too polite!
Yes, too polite to pass a comment -
Do they presume I'm vaguely ill?
Have they not seen me when I'm crazy?
When comes the time for me to kill!


Oh, are they aware I'm a werewolf?
Do they know that I live for the fight?
Do they know I'm forever a night fiend?
That my teeth are like knives when I bite?
Well, surely they see I get moody -
Listen up, I'm not going to lie!
They'll soon witness my little were-secret;
When the full moon it rises up high!


There are many questions, folk ignore...
Far too unnerved by what they'll hear!
The sound of screaming in the forest;
Which quickly brings the sweat of fear!
There are no bats here in my belfry -
Just random noise and manly growls...
Dirty footprints in the carpets -
And ruddy bloodstains in the towels!
If they don't know the facts already -
This evidence will shock them numb...
When they put two 'n' two together -
To see the beast that I become!


Oh, are they aware I'm a werewolf?
Not the sort that they'll cut down to size!
They will never see me swift approaching;
Cos the daylight's my friendly disguise!
I'm not some coward who they can go bully -
Nor some creep whom they might take the piss!
No, I'm a rather cross, ravenous werehound;
Some cruel monster they can't just dismiss!


There are many questions, folk ignore -
With answers still left unexplored...
Oh, the horror that's my history -
P'rhaps is something best ignored!
Yes, cos when the blood is flowing -
I cannot say I ever fret!
Yes, when I'm done I lick my lips -
But there's no feeling of regret!
Cos I've a duty to my victims -
To bring them right out of their shell!
To make them savour their last moments;
If a job's worth doing, do it well!


Oh, are they aware I'm a werewolf?
The sort who stalks out at night, cannot rest!
The kind who'd snaffle them all up for breakfast -
The type their mother's most probably detest!
All that rubbish 'bout sharp silver bullets;
Disregard it, these days we're immune!
So from this werewolf you ought to start running...
For when I eat you, there's no chance you'll swoon... 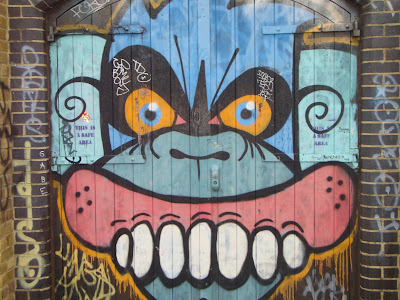