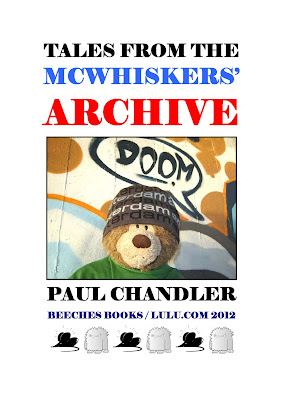 This week I'm going to be flagging up two new Yeti videos and two new books that I've finally released. I'm also going to share with you a few photos from a forthcoming SHY YETI ON LOCATION episode, SHY YETI BOTTLES SUMMER 2.

Let's start with the easy stuff - here are the two new films:

SHY YETI'S SEA-SIDE SHUFFLE - PART 1 is the first part of a two part series from the Folk Festival In Broadstairs, recorded in August 2012. It contains two poems and a rather silly song - not to mention yeti dancing and a whole load of other silliness. The poems included are IS IT CHRISTMAS ALREADY? and SWEATY YETI and the song is called ONCE I LOST MY HEART TO A CORNISH PASTY - the words and music are also by myself and it's "sung" by yours truly. Camera: Paul Chandler and Dan Hodges. Music: Paul Chandler and Dan Hodges. Thank you to the people of Broadstairs for their singing and dancing, especially anything that appears in this episode. The film and its contents are Copyright Paul Chandler 2012.

The other film is the first from my SHY YETI GOES WILD - LIVE Show at the Poetry Cafe...

SHY YETI GOES WILD - LIVE 1 is a show film from Paul Chandler's SHY YETI GOES WILD - LIVE AT THE POETRY CAFE, which took place on Wednesday 5th September 2012 at The Poetry Cafe in Covent Garden, London. Poems include: INVITE A YETI ROUND FOR TEA, AN ELEPHANT IN THE ROOM, DIAGONAL CAT, DO SHEEP MIGRATE? and new piece NOT AS SHY AS I WAS. Also featured in this video is John Smallshaw, Special Guest of the night who also performs a number of his poems. There is also a yeti dance... of sorts. CAMERA: Paul Chandler, Dominic McCauley and Calum Williamson. EDITING: Paul Chandler. MUSIC: Luca. The film  and the poems contained are Copyright Paul Chandler/Smallshaw 2012. THIS FILM IS A SHY YETI PRODUCTION 2012.

Before we go on here's a rough order of yeti film releases for the next couple of months.

This is going to be a 2-3 part mini-series, probably entitled SUTTON PARK 2012 with episodes being released over the next couple of months,

The second Part of the series from Broadstairs including the poems THEY DON'T RHYME THEIR POETRY IN L.A. and GRANNY ETHEL KEEPS THEM DECENT.

The second live video from the recent Poetry Cafe show.

This takes us to the end of October for the summeriest Halloween episode that you have ever seen!

After this I'm either going to turn to THE EPISODE WITHOUT A THEME, the Lake District 4-parter from August or by then I should have filmed my episodes from Brussels and Ghent. There are also one or two episodes that I've not yet finished, which I'm working on in slow time, like the episode that I began filming in Salisbury a weekend or so ago. This weekend just gone I was filming a second EPISODE WITHOUT A THEME episode in Oxford where I recorded two new poems YOUR CAKE ADDLED MIND and WE'RE ALL JUST BRAINS. I have no particular vision of when I intend to complete these episodes as there are plenty of instalments already in the can. Hopefully in the next couple of weeks I'll also be able to reveal where I'll be spending my birthday this year and where any holiday associated episodes will be located.

So now we move onto the two new releases - the first of which is a Mouse Of Commons short story collection:

TALES FROM THE MCWHISKERS’ ARCHIVE is a collection of five short stories and a novella that take Gladstone McWhiskers and Oliver Louse on a number of hair-raising adventures. We begin with an invasion of Whitehall by Shelving Imps, before moving on to Dublin where a mysterious piper is trying to lure pies from their homes. But that’s not all! Glad and Ollie also meet a “pie bride”, go to a pasta festival in Milan, Italy and find intrigue down on a farm where a herd of sheep are suffering from a baa-code debacle! All that and troublesome bear celebrity Charlie Grrr goes on a diet! Now something really must be wrong to cause that!! This book also features photos and a number of Auntie Astrid’s Agony Aunt columns! This is the paperback edition of a book for both big kids and little ones. The novella in this collection was written by myself and Auntie Astrid supremo, Gareth Bellis.

THE BEAST OF FRIENDS is a series of eight radio scripts concerning a number of curious characters; an amphibian journalist known as Horner, a witch called Katrina, Clive - a robotic clock, Cromitty – a voodoo doll, a werewolf named Colin and a fellow named Warren who had a very strange upbringing! This series, originally conceived in 2004, tells of what happens when they all live together!

ARE WE THERE, YETI!? looks like it's going to be ready nearer the end of October now, so I intend to launch it at the same time as the 10th anniversary of THIRD TIME LUCKY.

That's about it for now. Next week I'll be wearing my party hat for the 20th anniversary of SUTTON PARK, as well as looking ahead to next month's filming trip abroad and possibly sharing with you a new poem or perhaps some photos from a future SHY YETI episode. We shall see! 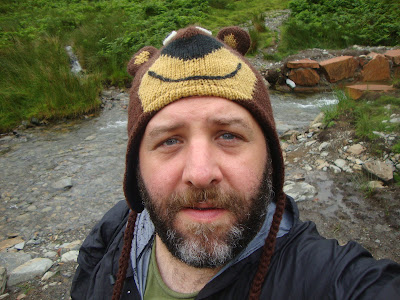