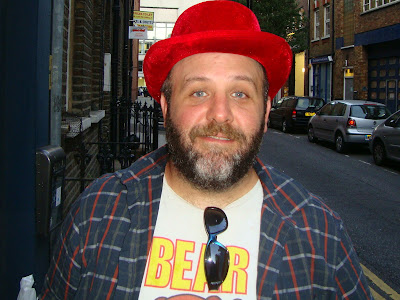 SO HOW DID THE SHOW GO? WAS IT WILD!?

So, what have I been up to this week? Other than the show, that is - we'll obviously come back to that in a while.

Well, the last time I wrote I was about to rush off to record another track for the new album. I did and was so pleased with the finished results that I posted it up for free on Soundcloud as follows...

MISTER MOSQUITO is a taster from my new album SHY YETI'S FRESHLY BAKED CUPCAKE COLLECTION which is currently being recorded in London, England at this very moment. This poem is from my forthcoming collection NOT AS SHY AS I WAS, which will available at all good www.lulu.com 's in Spring 2013. This recording was made in the library store cupboard at work during my lunchbreak on Tuesday 4th September 2012. Words and Music Copyright Paul Chandler 2012.

You can download this free for a limited period at: http://soundcloud.com/shyyeti/mister-mosquito 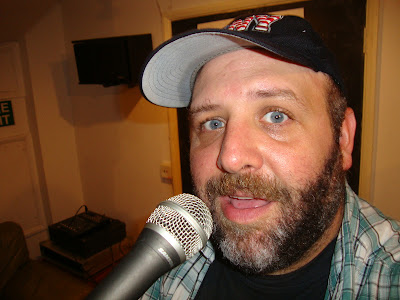 As I say, we'll return to the gig in a bit, but that wasn't the only thing I got up to on Wednesday 5th September - I also recorded another track - this time it was my piece GEOGRAPHY BE DAMNED from 2010...

The day after the gig, Thursday 6th September, I spent collating all the facts and figures about the night. It's just a me thing - it sort of helps me process what actually went on! I was also very pleased to see that the live video from Broadstairs was going down so well - having received over 50 views in just 3 days.

Friday 7th September, I saved the first draft of SHY YETI'S SEA-SIDE SHUFFLE - PART 1 and it's coming along very well. I also finished work on the new Mouse Of Commons collection TALES FROM THE MCWHISKERS' ARCHIVE. Just need to load it up and hopefully it can finally be launched alongside THE BEAST OF FRIENDS scriptbook, later this month.

Saturday 8th September... Travelled to Salisbury to see friends Friday night, on the Saturday we did a bit of filming for both SUTTON PARK and a future episode of SHY YETI ON LOCATION set in Salisbury; recorded my poem YOU'RE OWN SWEET OXYMORON near Old Sarum and also in one of the Park's in the city centre. Started work on a new poem called ANOTHER YETI POEM and pretty much finished one that I started in the week called IT WAS ME.

Sunday 9th September... Whilst visiting my parents house during the day I took the time to listen to some of the audio that I recorded from the Poetry Cafe show and selected a few pieces to include on the new album as "live" tracks. More about that once it's all done. I also recorded a version of my poem YOU, ME AND THE HOLLYWOOD HILLS. I did a bit more work on a couple of unfinished poems on the way home and wrote and completed a new piece called WE'RE ALL JUST BRAINS...

Monday 10th and Tuesday 11th September... Not a great deal to report except for a bit of typing up and I pretty much finished off the next SHY YETI ON LOCATION video which I then posted up on Wednesday 12th September... Which is today! The video is all but done now and should be up later in the week - so keep an eye out - more details during next week's post.

And now - finally... It's time to discuss the Poetry Cafe show from last Wednesday!

FIRST HALF
INVITE A YETI ROUND FOR TEA *
MISTER MOSQUITO *
AN ELEPHANT IN THE ROOM *
BEARS AREN’T MEANT TO BE BALLERINAS *
THE BLACK-EYED GROWL *
COLIN THE CUSTARD-EATING SPIDER *
DIAGONAL CAT *
DO SHEEP MIGRATE? *
A FLEA TEA PARTY *
LIFE IN A PELICAN’S BEAK *
THE STAND-UP CHAMELEON *
UNCLE BEAR *
WHY DON’T DRAGONS CLEAN THEIR TEETH? *
THE HIPPOPOTAMASES SONG ( AND SWANN) *
BEE-SOTTED *
MY DOG IN A DRESS *


NATIONAL TREASURE *
NOT AS SHY AS I WAS???? *
A LEARNING EXPERIENCE *
A TART IN PRUDE’S CLOTHING * (v1/2)
GLAMOUR AT ALL TIMES!
MINE OWN MINOTAUR
GLUE TO MEND A BROKEN HEART
CUPCAKE *
IS A TOADSTOOL A TOAD’S TOOL? *
A DEVIL WITHOUT HORNS *
NEVER TRUST A SKINNY FISH ‘N’ CHIP MAN *
HELLO! HELLO! I’M HALLOWEEN! *
RESPECTABLE TEXTS *
I LOST MY HEART TO A CORNISH PASTY *
I WILL EAT PIES *

Please note: In addition to this a good deal of this show was audio recorded for a future album release.


So, how did it all go? Well, I managed to read 16 poems in the first half and 15 in the second. I had to drop one or two poems that I'd considered performing for timing reasons as we had an extra reader during the second half; I also read a piece that I hadn’t considered reading due to popular demand! Oh, and I sang… If you can call it that! I was a little nervous, but then I am the shy yeti, after all!

The first half began just after 7.30 and this was mainly the “Goes Wild…” part of the evening - at least from my side and I read mostly animal poems – some new, some much older…


These first three pieces are all pretty new, the first is from my forthcoming collection, ARE WE THERE YETI!?, whilst the others are from the book I’m currently working on NOT AS SHY AS I WAS… Of course, I have to begin the night with a yeti piece and INVITE is one of my favourite that I’ve written in the last couple of years.


The next five poems were originally from a number of different collections – but were compiled earlier this year into my mini-volume SHY YETI GOES WILD. Many of you will know that I’ve been doing quite a lot of these animal pieces on the radio and during some of my SHY YETI ON LOCATION episodes from earlier this summer. The first of these I haven’t performed for a while and should probably win some kind of award for most mentions of the word bear in a poem… Do they do Oscars for that sort of thing? The other four poems have been aired a number of times this year – but not at one of my shows. They’re all favourites for different reasons. After the last of these it was time for John Smallshaw to come up to the front to read and you should get to see some of these in one of my live videos from the night that I hope to post up before the end of the month.


A FLEA TEA PARTY
LIFE IN A PELICAN’S BEAK
THE STAND-UP CHAMELEON
UNCLE BEAR
WHY DON’T DRAGONS CLEAN THEIR TEETH?


After John’s entertaining set, the next five poems returned to the animal theme – also being poems from SHY YETI GOES WILD that I’ve performed a lot this year one way or other. UNCLE BEAR was the only non-poem of the night – being an 100 word story, originally included in THE VAMPIRE COWS OF SCUNTHORPE from Summer 2011 and also in one of my Portland-based YETI HUNT USA episodes from around the same time. By now we were nearing the end of the first half…


The final three pieces of the first half included a lyric reading of the and Swann tune The Hippopotamases Song, along with a new piece BEE-SOTTED from next year’s NOT AS SHY AS I WAS and an old favourite – MY DOG IN A DRESS from 2006’s POEMS TO MAKE BEARS GROWL.


NATIONAL TREASURE
NOT AS SHY AS I WAS
A LEARNING EXPERIENCE


After bamboozling the audience with many daft animal poems during the first half I changed my plan for what I was going to read and began with a couple of very new pieces from NOT AS SHY AS I WAS – including the title piece. One of the audience members, Maggie Hughes, who has been following my work since I began self-publishing in 2001 had mentioned that she would like to hear me read A LEARNING EXPERIENCE, as it’s one of her favourites – and so I read did, as I had a copy of the poem with me. It was the first time that I’d performed it in 2012, at any rate - I last read it at The Poetry Cafe during my November 2011 show.


A TART IN PRUDE’S CLOTHING
GLAMOUR AT ALL TIMES!
MINE OWN MINOTAUR
GLUE TO MEND A BROKEN HEART


The next four poems come from very new collections – the first three from next year’s NOT AS SHY AS I WAS and the fourth piece from ARE WE THERE, YETI!? The first two have never been performed, the third I have recently been working on turning into a song and the fourth and final piece I’ve read previously during my November 2011 show. After this it was time for John to read again and he also brought up on stage a special guest poet called Aoowe Hamza who read poetry about war-torn . I also expect to include some of these readings in future videos.


My next six poems are all from books that I’ve published in the last couple of years… CUPCAKE and RESPECTABLE TEXTS are from 2011’s YETI HUGS AND OTHER HORRORS… CUPCAKE sort of came alive to me when I debuted it at The Poetry Café some years ago and so I’ve been looking for an opportunity to read it there again; however it ended up shunted off the set for the last couple of shows. IS A TOADSTOOL A TOAD’S TOOL? and NEVER TRUST A SKINNY FISH ‘N’ CHIP MAN are from the forthcoming ARE WE THERE, YETI!? collection and also ones that I’ve recorded for my new spoken word album recently. A DEVIL WITHOUT HORNS is from THE VAMPIRE COWS OF SCUNTHORPE and is one that I’ve been keen to perform for a while. HELLO! HELLO! I’M HALLOWEEN is only about 10 days old – and probably the most recent piece that I read on the evening. This one will be published in NOT AS SHY AS I WAS next Spring.


The final two were an old and a new piece. I LOST MY HEART TO A CORNISH PASTY is a song that I wrote at The Broadstairs Folk Festival in early August and I actually tried to sing it. I won’t say nerves got the better of me, because I did get through it – but let’s just say I didn’t sing it as well as I did on the “studio” version that will appear in some forthcoming SHY YETI ON LOCATION episodes. Still, the audience seemed to enjoy it, anyway and it led well into I WILL EAT PIES, which I didn’t sing – and which I often end my shows with.


I had intended to read a number of other poems, but for timing reasons had to cut them. From the first half the missing poems would have been THE BULLIER OF TEDDY BEARS, EXACTLY WHAT BEARS CAN’T BEAR, MY SELFISH CAT and THE PICK-POCKETING FOX. Poems dropped from the second half were SWEATY YETI, IN THE SOUP..., MURDERING THAT SONG..., RATTLESNAKES!!!, YOU’RE NO FRIEND – LET’S BE ENEMIES!!, A WASP IN A WIG, THE WEDDING BREAKFAST and HOORAY FOR BEARS.

Thanks to Calum Williamson for filming my poems, to give Calum a break I filmed all John and Aoowe's poems! Thanks also to everyone who came along or who donated to the charity even if they couldn't make it. The collection was for The Zoological Society Of London, in memory of John Ellis. If you'd still like to donate to the charity you can do so at: http://www.justgiving.com/In-Memory-of-John-Ellis 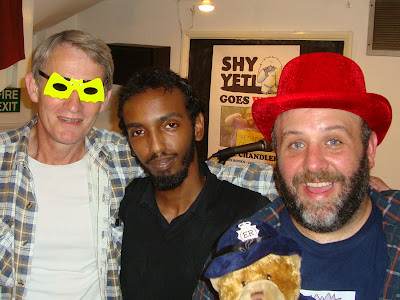 That's about it for now - next week I'll be talking a bit more about a couple of non-poetry books that I've just released and sharing links to the next SHY YETI ON LOCATION episode. We may even have a new poem or a photo gallery - let me look into it! It should be fun!! Hopefully...
More soon... 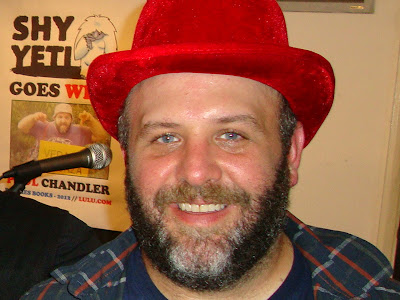