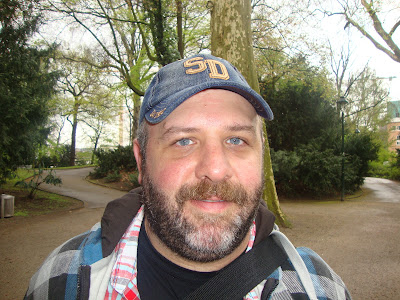 YETI FILMS FROM GERMANY AND A NEW POEM...

Yes - back again, as promised, with the links for the first of the two episodes of SHY YETI ON LOCATION that I filmed during my recent trip to Germany. I'll hand you over to the blurb...

This is the first of a 2 part series of SHY YETI ON LOCATION... The first episode of A TALE OF 2 CITIES, 1 YETI is set in Dusseldorf and features a couple of Paul Chandler (a.k.a. Shy Yeti)'s furry poems - A NIGHT ON THE TOWN WITH A YETI and DRUNK ELK. Other than the verse there is a yeti dance, a bit of a look around the city and plenty of other daft chitter-chat. Special guest starring Dominic McCauley. Music by Luca. Camera by P.C. and D.M. This film and its contents are Copyright Paul Chandler, 2012.

That's about it for now, next week I'll be sharing something new from my forthcoming release ARE WE THERE, YETI?. which is due out in the Summer... I'm also gearing up for filming another couple of episodes in the next month or so, as I have a week off in late May. My thoughts are that I am going to record a second episode of SHY YETI GOES WILD, as I have plenty of poems of an animal theme from the new compilation that I could use - also it looks likely that I'll be going back on Radio Wey around that time too. Filming for SHY YETI GOES WILD 2 began in Weybridge last Saturday (12th May), with help from Dominic who was the main camera man and also appeared in one of the sketches. The poem that I read was a piece called A WASP IN A WIG from a couple of years back. Despite being interrupted by cyclists I was still able to fit in a yeti dance, in fact I actually got quite acrobatic whilst doing so! You'll have to wait and see...  I had intended to film another piece the following day during a walk in the Saffron Walden area, however it was a bit breezy and I also forgot to re-charge my camera battery. This means that I'll probably finished this second episode during various walks this month - which means that I may film another separate episode at the start of June when I expect to be in the Norwich area - but a lot depends on the weather, of course... And me charging the battery!!

Before I go I did promise to post that new poem, EVIL IVY, written a couple of weeks ago and which I performed at The Poetry Cafe during my ROCK 'N' ROLLERCOASTER SHOW. Oh, and whilst I'm thinking about it I should probably add that there'll probably be another live video in time for next week's post too!


Evil Ivy…
What a scare!
With her pipe –
And birds-nest hair!
In her notepad –
Quickly jotting…
Makes you wonder –
What she's plotting!
Makes you worry –
Who she's after…
Hear her cackling –
With laughter!
Evil Ivy…
Looking vexed!
I think she wants you…
I think you're next!


Evil Ivy…
What a fright!
With her teeth –
As black as night!
With her eyes –
Intense and cunning…
A frown from her –
Will have you running!
She's got an eye –
On all that you do…
Her hobbies include –
Cats and voodoo!
Evil Ivy…
Not for hire!
She's stoking up –
Your funeral pyre!


Evil Ivy…
What a blast!
I wonder if your –
Nerve will last!
Are you really –
Gonna risk it?
Take the chance –
But not the biscuit…
I wonder who will –
Be the winner…
Oh man, she'll have –
You for her dinner!
Evil Ivy…
Likes to rave!
Horizontal baby...
...In your grave!