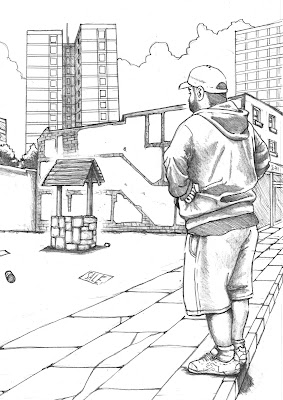 Just a quick post to start the year as it's been a pretty busy week here in Yeti Towers...

But first, what is this curious drawing that you have attached at the top of this post, you may ask? Well, I can answer you there... It's another of Pete Katsiaounis's drawing from FUNERAL FOR A SHOE - which is still available in hardback and paperback from http://www.lulu.com/

There is also an edition available in hardback which costs £16.99 and can be accessed at this link: http://www.lulu.com/product/hardcover/funeral-for-a-shoe/18670400

Returning to the subject of the artwork, there were 5 drawings done back in the autumn to accompany the five linking stories in FUNERAL FOR A SHOE. Pete has also been working on some new yeti logos and drawings, as you may remember from my last post. I'm keeping the rest of those under my hat for a little while longer! Needless to say they are extremely awesome.

Don't forget, you can read more about Pete and his artwork at: www.inkandmanners.com/

Anyway now... Onwards! Next up I have two links for you...

Here's a bit more information on the new episode...

Welcome to Shy Yeti's mini European Tour 2011... This is the second of a two part adventure in the mystic realms of the sublime and supernatural... oh, okay... it was actually just filmed in Europe in late October 2011. This episode carries on from where the previous part left us, in Bruges - and before I continue I can confirm that there is indeed a yeti dance! Poems include READY, TEDDY, GO and THE EUROVISION HERO from the 10th anniversary edition of JUNK/FOOD which were recorded during the trip - topped up with a performance of I BELIEVE (another JUNK/FOOD veteran) from my November 2011 Poetry Cafe show. There is also a 100-word story called GRANDPA'S WIG. This episode also includes a small preview of future episode filmed back in Hollywood during Autumn 2011. Camera: Paul Chandler and Calum Williamson (who makes a couple of cameos in the episode too!) Music: Luca. This film and its contents are copyright Paul Chandler, 2012. More soon!

This post I can also reveal which videos posted in 2011 did the best, obviously some were up for longer - but the results weren't as clear cut as that in the end! See them at the end of the message. Thanks to everyone who regularly watches the videos - it looks like mixing poems with 100-word stories works well in this format; so I'll keep on making them that way. There are plenty more episodes to come, I promise!

Next week I'll be discussing more about what you can expect from me in 2012 - and to announce my next gig at The Poetry Cafe in March; not to mention re-issues of old books and the next original collection in the pipeline.

Have fun, enjoy the videos and more soon!