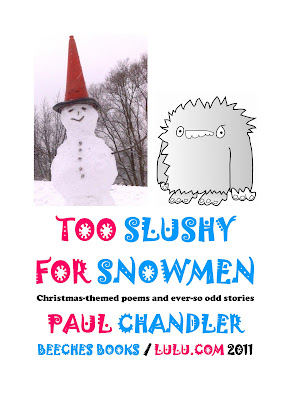 RADIO YE-TI
My Christmassy Return To Radio Wey - and Other Stuff...

Hello, you fuzzy people - I do hope you're all well!

As usual there's quite a lot to cover this week - let's begin with an update the Poetry Cafe show; which is nearly two weeks ago now, already! Basically there is a video up on Youtube and Vimeo and here's some more information and links to the videos...

This is a film from the 10th anniversary show for my first collection of poems: JUNK/FOOD which was self-published in autumn 2001. A special 10th anniversary edition of this book was released in October 2011 and this show took place at The Poetry Cafe near Covent Garden on Friday 18th November 2011. Guest star of the night was the fantastic John Smallshaw, who also appears in this video. Hopefully there will be another video from the night coming soon. Poems by Paul Chandler/Shy Yeti in this film include: EXIT PURSUED BY A YETI, THE VAMPIRE COWS OF SCUNTHORPE, GLUE TO MEND A BROKEN HEART, I AM THE GERMS and JOHN, I'M ONLY RHYMING. The poem by John Smallshaw is called THE HISTORY OF THE WORLD (AS I SEE IT...). Thank you for all who came to the show and also to Calum Williamson for filming the events. Music in this film is provided by Luca. The copyright of this film belongs to Paul Chandler and John Smallshaw, 2011.

Next up I have some information on a couple of my http://www.lulu.com/ projects - they're both compilations; although the first of them contains previews from two of my collections from next year.

Here are the details, firstly:

TOO SLUSHY FOR SNOWMEN

This is a small taster collection that I have put together, mainly due to the Radio Wey show this Saturday as I wanted to collect together as many of my Christmas-themed pieces as possible. In the end I found 21!

TOO SLUSHY FOR SNOWMEN is a compilation of some of the Christmas poems and stories that Paul Chandler (a.k.a. Shy Yeti) has included in his books, over the years. This compilation also contains a number of exclusive new poems from his forthcoming books ARE WE THERE, YETI!?! and NOT AS SHY AS I WAS which aren’t due to be published until mid/late 2012. As you can imagine, a yeti Christmas is not necessarily a conventional one. It’s more a mysterious, alternative Christmas and in some places darn scary. Includes the poems: BLACK-MAILING SANTA, IS IT CHRISTMAS ALREADY!?, THE UNAFFORDABLE FJORD and the title piece and the stories - HAPPY EX-MAS, JACK FROST'S CHILLI DIET and THE MELTING SNOWMAN.

The full line-up of 21 pieces ranging from the early 00s until previously unpublished material is as follows:

TOO SLUSHY FOR SNOWMAN is 48 pages long and available for £4.99. The front and back covers appear at the top and bottom of this very post! I shall report back next week as to exactly which pieces from it that I read!

Secondly we move on to...

Now this collection is another compilation; one of two - both of which I am re-issuing with refreshed graphics. They originally came out in 2007 and the content remains largely the same; however both this and it's sister collection WOOED-ER AWAKENINGS have be reissued with new covers. You may have seen them on my post a couple of weeks back. WOOED AWAKENINGS is already out and WOOED-ER AWAKENINGS should appear with it's fresh face by the new year.

For those who don't remember the compilation - here is further information...

WOOED AWAKENINGS is a compilation of Paul’s earlier poems which particularly focus on the strange world of relationships. These are not just your ordinary day to day marriages and break ups - but bitter and peculiar tales of those who have been wronged, those who have deceived and one man, in particular, who has fallen in love with a statue. The 75 poems in this book were written between 1999 and 2004 and first appeared in the collections JUNK/FOOD / ROLLERCOASTER and THIRD AND 4TH TIME LUCKY, both first published here on lulu.com. There are also two new poems published for the first time in this collection, written during 2007.

Finally, I promised something else from my new collection FUNERAL FOR A SHOE which was launched on Friday 18th November during my Poetry Cafe gig.

The paperback edition is available for £9.99 at: http://www.lulu.com/product/paperback/funeral-for-a-shoe/18669080

There is also a hardback edition.

The piece that I have selected is called SUMMER SKIES - it's a short, mysterious story which I am posting to distract you from the horrible winter weather outside! I hope you enjoy it. Just be careful when you're out sun-bathing next year, won't you! Especially if it's a cloudy day!

Lying high on the hill gazing down upon the humdrum life going on below me in the valley, I eventually retire my voyeurism and lie back into the grass - staring up into the Summer skies. The sound of the sheep on the other side of my field is eventually drowned out by the thoughtful silence in my head. It’s a hot day and yet there are a lot of big clouds out; cruising across the sky like solid predators. Above me a cloud is watching. It is the size of the field, bigger perhaps. It has been watching for some time now. Unlike the other clouds it appears not to move; intent on studying us. It hangs there above me and yet gradually it seems to slowly descend – the field is becoming misty now and the Summer day is quickly lost. I stand up from the wet grass; aggrieved and yet already the cloud seems to be moving on; lifting, once more revealing the sun and blue sky. As it departs the cloud appears to wink at me and it is only then that I notice that all the sheep have gone - and I am alone… 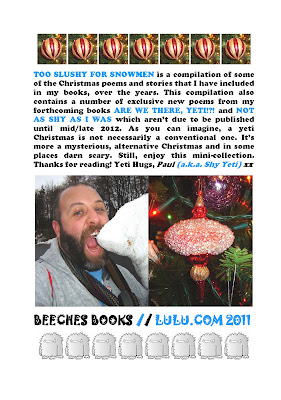 This post and its contents are Copyright Paul Chandler, 2011
Posted by Paul Chandler at Tuesday, November 29, 2011