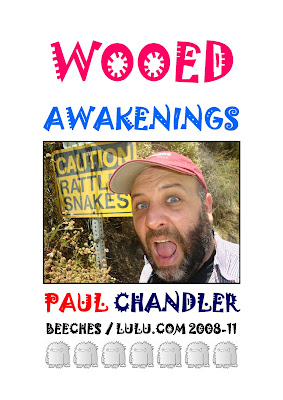 HAVING A GLORIOUS TIME IN CALIFORNIA!

WISH YOU WERE HERE!

I really don't intend this as a gloating exercise - it's really not! Partly I just want to be able to keep up with my weekly posting on the blog until the end of the year and also to update you on the trip and what I've got up to creatively. No photos to share with you yet - just a couple of redesigned covers for my WOOED AWAKENING collection. I'm not re-issuing it or anything - just updating the cover to be more in line with some of my other recent releases.

As I have already mentioned my intention is to continue filming YETI HUNT U.S.A. As you may recall the first five episodes were filmed in July and August - the first three of these are already up on Youtube and Vimeo, with the 4th available any day now. This trip I have been working on what will hopefully round off the series with a final 3 episodes. I'm aiming to read a poem or two from my 10th anniversary re-issue of JUNK/FOOD as well as one or two pieces from FUNERAL FOR A SHOE which is due out on the 18th November 2011 in time for my show.

Having brought my suitcase into work on Thursday 3rd November, the trip moved apace after work on Friday 4th November when I headed for the Jury's Inn hotel near Heathrow airport - flying out at 10.30 am on the Saturday morning...

Alas, neither Dominic or I were feeling our best on my arrival - a mixture of jetlag, the ends of a cold and goodness knows what I picked up on the plane! :( It even affected my appetite! (Unheard of!) Luckily, it didn't last long and we were feeling well enough to see our friends Patrick and Julia on the Sunday - but I only took a few establishing shots and a couple of photos! Not up to the usual prolific yeti standard by any means!

Dominic and I headed off to San Diego on Monday morning. Neither of us were exactly feeling our best - but we got their safe enough and did a nice walk around the city. I didn't do a great deal of specific filming, but I did get a lot of establishing shots and photographs and some nice footage of a sunset down at the harbour.

Tuesday I was definitely feeling a bit more my yeti-self. That said, I still managed to reach our first port of call for filming without the battery in my camera and Dominic was nice enough to drive us back to the hotel so that I could pick it up and we returned to almost the same parking space without too much trouble at all. The majority of filming that morning took place in the Cacti Garden in Balboa Park where I managed to film an old poem called I AM THE GERMS from my JUNK/FOOD collection - not to mention some linking bits and pieces and a couple of daft sketches. After taking a walk around some of the other gardens we drove in the general direction of Torrey Pines State Reserve, although didn't really find quite the location that I was hoping for. I'm sure had we found the right entrance than it would have been a good place to film - but our map didn't really show the full extent of the reserve and the only part we found looked a bit like a desert on top of a cliff! In the end this definitely worked in our favour because we ended up in La Jolla Cove - which I pretty much only chose for us to explore because of the word "cove"! Not only were there some little caves to film in and a cute little beach - but also about a million seals, pelicans and goodness knows what else! In the end I only filmed some sketches and linking bits - but that was just the sort of thing I was looking for as I expect the footage to be used in an episode that will also probably use footage from my forthcoming November 2011 Poetry Cafe show.

Wednesday we were due to head back to L.A. from San Diego; although we did do this - we also filmed a little scene in our hotel room involving the mysterious "Yeti X" and then once back in L.A. we played a quick visit to Griffith Park and I recorded a version of DOLPHINS CAN BE SOCIABLE from my 10th anniversary edition of JUNK/FOOD.  Dominic and I went to see The Bangles that evening at House of Blues on Sunset Strip - which was the best gig I've been to since I saw The B-52s in 2008 or 9, back in London.

Not a great deal of filming was planned for today as it was my birthday and we were heading for Disneyland; that said I did lots of little bits and took photos that I'm sure will turn up somewhere. I'll probably use some of Disneyland's fireworks at the end of one the episodes too - but shhh, don't tell them! All in all it was a fantastic birthday day out! Thanks all to Dominic (and Mickey Mouse!) :)

That's today! At least where I am! I always knew it was going to be one of the busiest of the trips over here - but the week went so quickly! Friday we managed to fit in trips to some of my favourite L.A. places - from Cici's cafe for brunch to Cd Trader record ship and Peet's Coffee, just across the road. We then headed to Topanga Canyon - scenes of many of my previous episodes of SHY YETI ON LOCATION, where I filmed a number of short stories and 2 or 3 poems too - not to mention a couple of yeti dances and many various sillnesses. I won't named exactly what I filmed, as yet - as one or two of the pieces might be held over to episodes for 2012; so I'm not sure yet when it'll all be available. What I can say is that there was a piece from JUNK/FOOD and one or two pieces from FUNERAL FOR A SHOE - not to mention a piece called INVITE A YETI ROUND FOR TEA - a very new poem which is due to make it's live debut at my Poetry Cafe show next week and which will probably eventually appear in my ARE WE THERE, YETI? collection during 2012. There was plenty of additional silliness too!

Sadly I'm off home tomorrow (Saturday) - although I should get some quality time with Dominic and manage a few last photos and films before I head off; probably in Griffin Park somewhere. All I wanted to film for this last visit has certainly been achieved - and more! If all goes to plan then this may well be my last trip out to California for a while; although certainly not my last to the States.

This time next week I'll be doing my Poetry Cafe show! It's all go, innit!? More soon!

P.S. To finish with a couple more covers - the one for WOOED-ER AWAKENINGS uses another of the photos from my previous trip to California this summer.

P.P.S. Please note: The Copyright of this post belongs to Paul Chandler, 2011. Thank you! 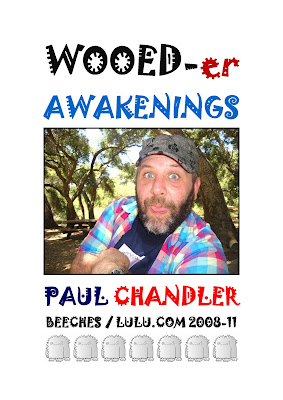 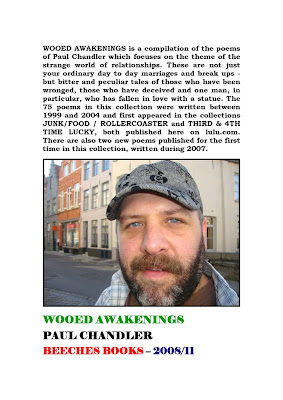