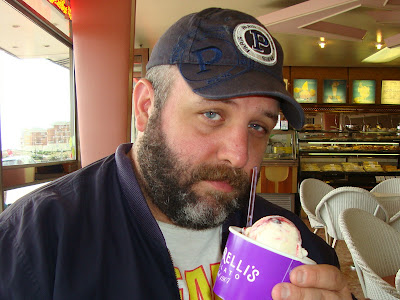 1) Finishing touches to FUNERAL FOR A SHOE

Well, I'm pretty much all done for this collection now - but just awaiting the crowning glory; some illustrations that have been especially commission for the book. It depends how quickly those are completed as to whether I realise it in November when the JUNK/FOOD 10th anniversary book is launched or whether I leave it until January next year; but either way I intend to read a few of the pieces at my JUNK/FOOD show on Friday 18th November.

At time of writing I'm due back on Radio Wey a week tomorrow... Hopefully I'll get a chance to read some of my newer poems and some of my 100 word tales; although I'll have to make sure I don't scare people! Well, not too much, anyway...

3) Posting of next SHY YETI ON LOCATION video...

I've been having a lot fo problems with my editing of late. There was a hiccup back in May when I was editing the first episode of A YETI IN PARIS, but the troubles that I've been having with my A YETI ON THE ISLE OF WIGHT video (now currently entitled ISLE OF YETI) has far exceeded that! The first edit was corrupted and so I decided this week to work on three "nuggets"-sized episodes, rather than one ten minute episode. These three videos would be roughly the length of your typical pop video. Otherwise it's the same. Each "nugget" would either have a poem or a short story, views of where I travelled and also silliness; whether that be waffle from me or a yeti dance! Unfortuantely I've had trouble editing these two - with only one successfully complete - part 2 of all things; so I can't even post it! At time of writing I have decided to return to the original format by doing a slightly shorter episode (maybe 8 or 9 minutes) with the minimal of special-effects, music, extra footage and will see what happens. It's looking a bit more positive... Hopefully I'll have something to post by this time next week!

4) Filming in Lille and Brugge

I'm off to Lille towards the end of the month for a weekend; there should be enough time for a visit to Brugge too. So hopefully I will return with some footage from both cities that I can release as a full length or "nugget" style episode of SHY YETI ON LOCATION. More information on that nearer the time!

5) Work continues of ARE WE THERE, YETI!? and Mouse books - not to mention re-issue of ROLLERCOASTER...

I've already typed more than 50 pieces for the ARE WE THERE, YETI!? book - and there are more that need typing. I am also currently proofing TALES FROM THE MCWHISKERS ARCHIVES, which will be my Mouse book for 2012; not to mention working on the sequel to this year's GLADSTONE MCWHISKERS AND THE COUNTER-CLOCKWISE CONUNDRUM. I'm up to Chapter 3, but don't expect this one to be ready until 2013. Other than that I'm also working on the re-issues of ROLLERCOASTER, THIRD TIME LUCKY and GO 4TH AND DIVIDE - my 2nd, 3rd and 4th poetry collections, for their tenth anniversary editions. All this and also I've written 4 of the 8 scripts for the first season of my BEAST OF FRIENDS series; the first episode of which is featured in my FUNERAL FOR A SHOE collection. I hope to make this project available as a stand-alone book at some stage during 2012.

The tenth anniversary edition of JUNK/FOOD is now pretty much ready to go and should be available from Monday 31st October 2011. It is 96 pages long and contains a lot of new content and is available for the more-than-reasonable price of £5.99.

To finish off with I am posting something from my next collection FUNERAL FOR A SHOE... This time I have chosen a piece called STOUT LEGS IN A SUMMER STORM; which is all about how it sometimes better to be a little more chunky in shape!

I hope you enjoy it; there will be more soon!

STOUT LEGS IN A SUMMER STORM

On that fateful afternoon the Summer storm suddenly grew into a tornado – for the first time in my life I was glad of my stout legs. I’d spent all Spring staring at them sadly in the mirror and wishing that they were different; dreaming about how nice it would be to have the long, slim legs of a catwalk model – or professional tennis player. In reality I have the tree trunk thighs and bandy ankles of a woolly mammoth – grizzly bear or diplodocus... All I wanted was what I considered to be nice legs – legs that I could show off; that I could parade around town displayed in brightly coloured shorts; maybe with some kind of tan.

But then the storm came and – boy, did it come... All the skinny ladies and the fitness obsessed gentlemen with the good legs were rendered useless in such an emergency; six-packs, salon-fresh hair and botox smiles couldn’t save them. There I sat – immovable – just watching as their legs snapped like brittle twigs; broken in two by the tornado – as they battled in vain against the winds. Their legs simply couldn’t hold them and they blew away across the trees like feathers and were very quickly gone – no doubt their remains were later eaten by sturdy legged rats once they emerged from their safe havens underground...

My legs, however, stood firm and not only that – my belly also helped too and ensured that I was not sucked from my home and out through the front door...

I remained safe – I would not budge – not even a tornado could make me...

Since that dreadful summer storm it is just us flabby-arsed fatties that are left...

But how thankful I am now for my chunky, hunky, big, stout life-saving legs...

There really was nothing wrong with them after all…


STOUT LEGS IN A SUMMER STORM appears in Paul Chandler's new collection FUNERAL FOR A SHOE, due out in late 2011, early 2012. Date to be confirmed. Copyright Paul Chandler 2011.
Posted by Paul Chandler at Friday, September 30, 2011