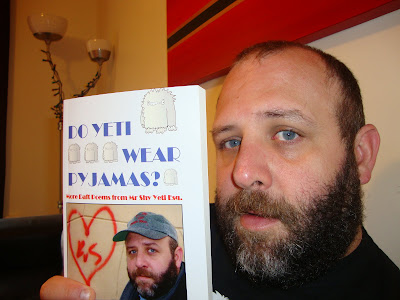 FINAL VERSION OF "DO YETI WEAR PYJAMAS" TO BE LOADED UP BY MONDAY NEXT WEEK...

This is probably the final post before "DO YETI WEAR PYJAMAS?" is available to buy - although the official release day will be Monday 31st May 2010. (A bank holiday! Yes, I know - but what better way to spend your bank holiday than by reading my new book... Okay, so I'm kidding myself - but if the weather is good!? Maybe!?)

I have received the 2nd draft copy of the book with the revised cover and am just making a few final changes. I'm hoping that a hard back edition of the book will also be ready by the 31st for anyone interested - but we shall have to see.

In other news I am still working on THE DEATH OF LOVE and have been working on some new poems for this during May, however I am also spending quite a bit of time at the moment completing my next Mouse of Commons book: POSTCARDS FROM MCWHISKERS as part of my celebration of 10 years of Gladstone McWhiskers. I have also nearly completed the first draft of a new Mouse novel and am working on a couple of the many short stories that I wrote about Glad and Ollie back in 2008, but have yet to type up. In addition to this I am writing a number of short stories for my collection: THE YETI MACABRE - having completed the first of these THE TATTOOED SKELETON earlier this week. In addition to the half dozen or so short stories in this horror themed collection I have selected a number of poems from all my volumes to date that fit this theme. As of last week I also rediscovered a number of scripts and monologues that I wrote between about 1998 and 2000 - a play called A CROSS TO BEAR (more of a thriller - but with murderous overtones), a short play called SCEPTIC (a ghost story), a monologue called TOUCHWOOD (a weird murder story) and a four part radio script called THE DO-GOODERS. The final script is a comedy drama about an neighbourhood watch team. The adventure included is calledin an adventure named THE NEIGHBOURHOOD WITCH which was the only story in the series to ever be completed, at least to date. A second story was planned and is partially written in the archives, so may be returned to! So the long and the short of it is that THE YETI MACABRE is going to be approximately 400 pages of horrifying (in a good way) poetry, stories and scripts - with all but the poems being previously unpublished.

I will hopefully be filming a new episode of SHY YETI ON LOCATION in June, featuring poems exclusively from the new collection - and here is one of poems that I am considering, HE EATS SO MUCH...

More news next week once I am 100% the book is going up - with yet another poem from the new collection.

PS The photo below was taken just after my return to open-mike night, last week. Thanks to Harry for coming along and for taking the photo. :) 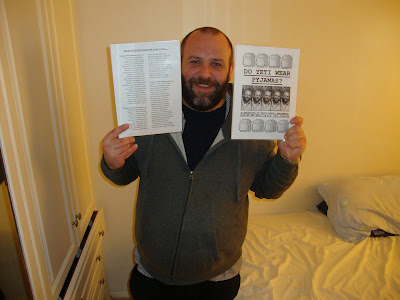 
He eats so much cake –
He can see in the dark!
He slurps so much tea;
As he walks in the park!
He gulps down fresh air;
Always drinks his bath water!
He will need to wear stilts;
If he grows any shorter!
If he's eating his lunch –
No, he won't take a call!
He is growing so fat –
He's becoming a ball…
He's becoming a blob –
Like some bald burping toad!
If he eats any more –
Then one day he'll explode!


He swigs so much beer;
That his belly’s grown wider!
Well, it makes his eyes bulge;
So he’s trained up a spider!
To deliver his goodies –
Saves himself from the strain!
Weight is the only thing;
That he ever did gain!
But he thinks he looks great!
He enjoys all the buzz!
Oh, he thinks he looks awesome!
Yeah, so maybe he does!
Who's to say he looks bad?
That is only your view!
That is just your opinion!
Who the hell then are you?


He eats so much candy –
His knees they do shake!
He eats so much fudge –
And huge slices of steak!
But does he want to cut down?
No, he doesn’t, not really!
Oh, the sight of a cake –
Makes him so touchy feely!
But why d’you want him to change?
What business is it of yours?
You’re the one who has issues –
With those cakes he adores!
So, he does not eat veg –
And finds fresh fruit too fruity!
He’s quite happy with pie and –
His own unique beauty!