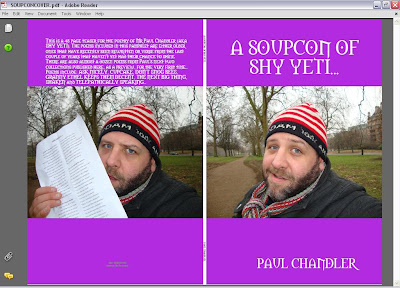 A NEW COMPILATION: A SOUPCON OF SHY YETI!!

I've been busy over the last week or so - not only going along to open-mike nights (see previous post, also published today), but also putting together a new compilation: A SOUPCON OF SHY YETI (the cover of which is above!) The poem, CUPCAKE, which I included in my last post having read it at the open-mike night is also included in SOUPCON which is a compilation of old poems (two re-written), poems from my 2009 collections, as well as a number of poems from both THE DEATH OF LOVE and May 2010s release: DO YETI WEAR PYJAMAS.

A SOUPCON OF SHY YETI...

This is a 48 page teaser for the poetry of Mr Paul Chandler (aka SHY YETI). The poems included in this pamphlet are either older ones that have recently been rewritten or verse from the last couple of years that haven't yet had their chance to shine. There are also almost a dozen poems from Paul's next two collections published here, as a preview, for the very first time...

Here are the poems that it includes:

FROM: THE AUTUMNAL E.P. (2003)
Available from www.lulu.com as AUTUMNAL LOVERSONGS

FROM: LOVESONGS FOR THE BITTER AND TWISTED (2004)
Available from www.lulu.com as AUTUMNAL LOVESONGS...

FROM: IF POEMS WERE PIES (2009)
All the following books are available from www.lulu.com

THE BEAR WHO KNEW TOO MUCH
DISGUSTING OF TUNBRIDGE WELLS
DO KITTENS DRINK CUSTARD?
HOW IS HE?
I CANNOT LOVE YOU
LOVE YOU MORE THAN APPLE CRUMBLE

BEARS AREN’T MEANT TO BE BALLERINAS
BRAND NEW PULLING PANTS
THE LAST LOVE LETTER
OLD BAG FOR LIFE
OUT OF WORK ACTORS
WHAT HAVE WE DONE?

COMPLETE ME
A DARK SIDE TO YOU
I LOVE YOU, BUT...
IF YETI WERE SHY
MAKING TOAST FOR THE ENEMY
THE UNAFFORDABLE FJORD

Hopefully I shall read a few of these revived poems at my show next month - only time will tell...
More soon! 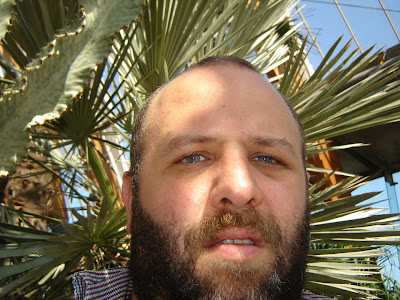 Having taken part in the MEDICINE MOUTH – LOVED UP show on Friday 12th February 2010 I discovered that my friend Harry was also available on the Tuesday to accompany me to The Poetry Café open-mike night, which I had not been to since late September 2009. When the show started Harry volunteered me to read at the start and so for the first time so far I was the first poet of the night; which was kind of nice – except for one little hiccup, which I’ll come to in a bit…

Although I’ve been reading this one quite a lot in the last year and only just recorded it for inclusion in my SHY YETI’S VALENTINE SPECIAL video of February 2010. I also performed it at MEDICINE MOUTH the previous Friday – but to my knowledge have never read it at the open-mike night. This poem has probably had its moment now – so it is time to let it have a little rest maybe.

I decided that I’d really like to read one of my new poems – something written this year and something that I knew nobody would have heard. This one was originally going to be debuted at MEDICINE MOUTH, however in the end I stuck to older pieces. As I read it I also noted a couple of typos – which helped from a proofreading respect! It’s quite a creepy poem really, depending quite what tone it is read in – but I do find it rather delicious to read. It will probably turn up again during my March gig.

Although this is one of my most requested poems – I have not yet posted up a video of it – although I do have a copy of a live version of it from my September 2009 gig and one that I recorded at my friend Anthea’s in Muswell Hill during February 2010. Although I have read it during gigs and at the MEDICINE MOUTH show only days before I don’t believe I have ever read it at an open-mike night. It seemed to go down well, however I was gonged off during the final lines of the 2nd and final verse because I had over-stayed my allotted 5 minutes! D’oh! This was because I was too busy plugging my March gig at the start – you stupid yeti!! Still, people seemed to get the jist…

You're my cup cake - I adore you...
Yes, you are good enough to eat…
If I saw you at the bus stop –
I'd kidnap you on the street!
I would put you in my lunch box –
You are a treat I'm gonna save...
Yes, I will keep you to myself –
You always hurt me, but I'm brave!
Yes, you are really bad for me –
And I'll soon put on half a stone…
But I wouldn't care about my weight –
If I could have you as my own…
If I could keep you in my larder –
If I could nibble you at will…
No, I would never tire of you...
No, I would never get my fill...
You're my cup cake and I love you…
Just so cute upon my plate…
Well, I want you and must have you!
No - you MUST not make me wait!!


You're my cup cake - I adore you…
And you are really quite enticing!
You are quite my favourite candy –
And I like toying with your icing…
I'll place a cherry on your top –
And then I'll kiss your sugar coating…
You are my favourite luxury –
Who deserves some extra-special doting!
I will paint a picture of you –
I will cosset every crumb!
Oh, I'll unpeel your pretty cup –
And wrap it round my chewing gum...
So, are you gonna rot my teeth?
Well, I am sure you're gonna try…
Will you give me diabetes?
Just so sweet I'll surely die!
You're my cup cake and I love you…
I do not wish to seem too needy!
But I want to wolf you down in one –
Yes, I must have you - I'm SO greedy!


You're my cup cake - I adore you…
I do not mean to sound too hasty!
But you have the delicate construction;
Of my favourite Danish pastry!
Is your centre full of jam?
Do you consider me too scruffy?
Oh, your sponge it tastes like heaven –
You are as tasty as you're fluffy!
You are melting in my mouth –
Now you are coursing through my veins!
It doesn't benefit the both of us –
If either one of us abstains...
You have made my fingers sticky!
My clothes I'm gonna have to brush!
You have left yourself across me –
I think I've got an ickle crush!
You're my cup cake and I love you…
But now I crave another bite!
You and I should be together –
But now I doubt we'll last the night!
Posted by Paul Chandler at Tuesday, February 23, 2010