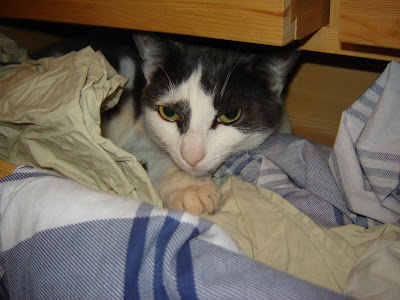 MORE POEMS ABOUT CATS - ANOTHER GIG AND MORE VIDEOS...

Hello again! Having begun to read the poem: MY SELFISH CAT on my last SHY YETI ON LOCATION video I decided it'd be nice to post it in full on the blog now it is complete. It's not actually a poem from the next book - but one which should appear in LA MORT D'AMOUR later in 2010. That said, I promise that I'll post something from DO YETI WEAR PYJAMAS very soon.

As of yesterday I began work on the next episode of SHY YETI ON LOCATION, making the best use possible of the snow that fell early on the 13th January. I've decided on a theme of snow for the next episode - but not necessarily reading poems which are specifically about snow; just mention it in passing. In fact some of the poems that I have chosen I have never read live before - or certainly not in the last couple of years. I'm hoping to complete all the footage by the end of the week and begin editing over the weekend - so there should be a new episode up sometime next week.

Meanwhile, back on the book front I am now aiming to have DO YETI WEAR PYJAMAS ready for release around the 6th March 2010 - which is the date, I can now confirm, of my next gig!


My old cat's so selfish -
He is always on the take...
I always get his dinner -
But he never buys me cake!
No, he never does a thing!
He never turns a thought to me!
He never pops the kettle on -
Just in case I'd like some tea!
Yes, he plays his music loudly -
The greatest hits of moggies mewing!
Well, he could still do stuff like that -
But also have a nice pot brewing!
No, he never makes the bed up…
He never hoovers round the flat!
There is no-one quite as thoughtless -
As my fat old selfish cat!


My old cat's so selfish -
No, he don't appreciate...
If I dress him in the morning -
That I get to work dead late!
Can't he do such chores himself -
Or give his fur a thorough brush?
Cut his toe-nails with the clippers?
So I'm not left in such a rush!
But he can only see it his way -
Yes, fast asleep there on the bed!
He doesn't care that we need money -
Just as long as he gets fed!
I let him live here in my home -
Who wears the trousers in this flat?
Who is it says what's what?
It is my fat old selfish cat!!


My old cat's so selfish -
He's a feline lazy bones…
But he never hears a word…
Despite my grumpiest of moans!
No, he never takes the litter out…
No, he never pays his way!
No, he never goes to work…
Oh, such an arrogant display!
I think he does it just to spite me…
He never passes the remote!
If he doesn't pay his taxes -
Then he shouldn't get to vote!
He just sits there like a god…
Just so austere upon his mat!
With his disapproving whiskers -
It's my fat old selfish cat!


My old cat's so selfish…
He is always on the make!
He keeps pushing at my patience -
And very soon it's going to break!
He's always snapping at my heels -
I wish he'd just mew something nice!
Even when it is my birthday -
He won't share with me his mice!
But like an idiot I love him -
Safe on the sofa and content…
He won't even clear his litter!
It's not as if I charge him rent!
If he keeps on the way he's going -
Then we're going to have a spat!
Oh, my love so unrequited…
By that fat old selfish cat! 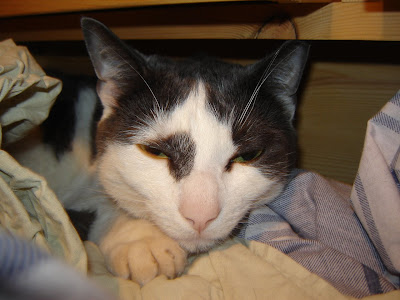 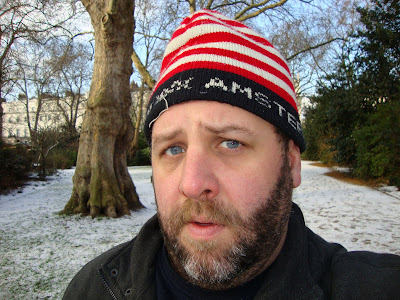 I thought I should probably announce the posting of my second SHY YETI ON LOCATION show - this one filmed in a secret location in London.

SHY YETI IN A SECRET LOCATION

This episode of SHY YETI ON LOCATION is filmed from not one, but two secret locations - and one of those is full of snow!!! This time Mr Yeti reads three poems: WE'RE GOING TO CLONE YOU, I LOVE YOU LESS and DON'T SNOG BEES from his almost finished new book - DO YETI WEAR PYJAMAS? There is also a couple of verses of a poem-in-progress and of course - more crazy yeti dancing! :) The second video link is to a clip featuring out-takes from the first show...

Out-takes on VIMEO to follow mid-week as I have hit my upload limit for the week. 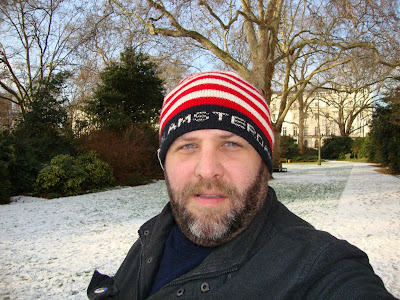 As I haven't updated this list for a while I thought I'd just do a small roll-call of which of my online videos (other than BLOGTV ones) have been getting the most viewers. Please note - all 2010 videos have been posted on both Youtube and Vimeo, all previous videos posted just on Vimeo.

I know I promised a new poem this post - but as you have a whole new video to watch - which contains 3 and a half new poems I think that's quite enough for one post!

More soon - take care and get watching them there videos - yeti hugs, 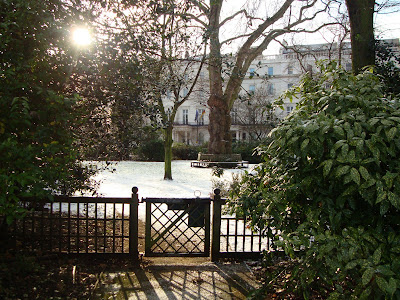