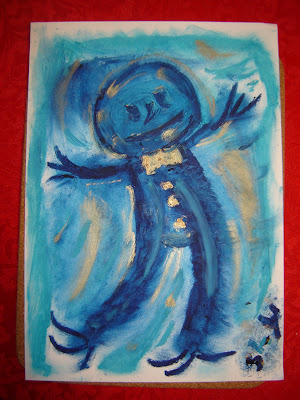 SHY YETI PRESENTS - A PICTURE WAT I DREW AND A NEW POEM...

Well - I may be able to write the odd poem or hundred; but I have never claimed to be an artist. I still don't - however I have surprised even myself by a little drawing I did this weekend using some lovely oil crayons that I bought when at an art fair in Harrogate the other week. As those of you who read my blog have seen I have begun to do collages when working on my recent covers and so was there to help out a friend and also get some ideas for future covers for any books I release in 2010. The cover for my next book: DO YETI WEAR PYJAMAS is already complete - but it was whilst at the art fair that Kirk suggested THE DEATH OF LOVE as a title and I thought it sounded good in French; hence the next book being called LA MORT D'AMOUR... So expect a suitably dramatic cover for that.

Anyway - the drawing that appears here is a first attempt; but has given me some ideas for more. I've decided to post the title collection from my next book to go with this new picture; although it's more of a scarecrow or snowman than a yeti.

I hope you like it. Just shows you - even if you think you can't draw for toffee - sometimes it's worth having a go. :) You may come up with something you or other people really like...


Do yeti wear pyjamas?
Or would they simply be too warm?
Would they need a large umbrella –
If they were caught within a storm?
Would they wear nothing more than socks?
In the deepest midst of winter?
Would they view a bedroom farce –
Or are they far more into Pinter?
In the summer is a bobble hat –
The order of the day?
Would they eat a peach or pear –
Or just prefer a Milky Way?
There is much that's still a mystery –
About the yeti and its thinking!
Can they flaw some errant villain –
Quickly; just by simply blinking!
Can they read your mind completely?
Would they do so for a bet?
Oh yes, there’s still so much we need to know –
About the yeti YET!!


Do yeti wear stilettos?
Even though it makes them totter?
Do they read a little Shakespeare –
Or much prefer a Harry Potter?
Do they like to sing to rock –
Or are their voices far too croaky?
Will they croon "I will eat pies..."
Each time they go to karaoke?
It's hard to guess what makes them tick?
If you should catch one unawares!
Are they relaxed or very vain?
About the greying of their hairs?
There is so much that's still unknown –
About the yeti and their living...
When it comes to birthday presents –
Are they really very giving?
Do they like their curry spicy?
Do they love their coffee wet?
There is oh so much we need to know –
About the yeti YET!!


Do yeti wear galoshes –
Or are their feet just far too wide?
Would they look dead good in white?
Just like some sweetly blushing bride?
Would they ever try their chances –
Pirouetting in the ballet?
Do they ever take vacations –
Out to Paris - or to Calais?
Or is it simply much too hard?
Do other tourists rudely stare?
Well, a yeti wouldn't want to –
Cause a fright or badly scare!
There is still so much to learn –
About the yeti and its ways!
No, they're never really fierce –
And being nice not just a phase!
Well, they often seem quite sad –
As if they're filled with some regret...
There is still so much we need to know;
About the yeti YET!!


Do yeti wear suspenders –
Just to keep their assets snug?
Do they ever seem quite distant?
Do they crave a friendly hug?
Do they like to share a story;
Of fine days, long since passed by...
Would they take a bath in treacle?
And if they did; DO tell me WHY?
Are they fresh and lemon smelling?
Or are they sadly pretty stinky?
Are they ever-so straight-laced?
Or really truly rather kinky?
As they gulp down cups of tea –
Deep down beneath their perfect sheen!
There is so much under wraps –
About the yeti's odd routine...
Would you like to get to know one?
Would you like one as a pet?
Well, if you did maybe you'd learn
THE TRUTH!!!
About that sly old yeti; YET!!! 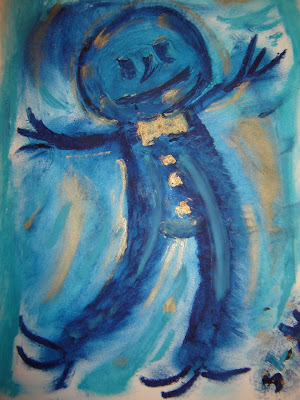 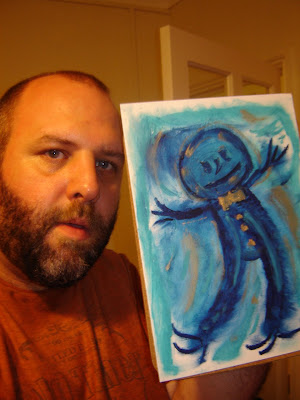