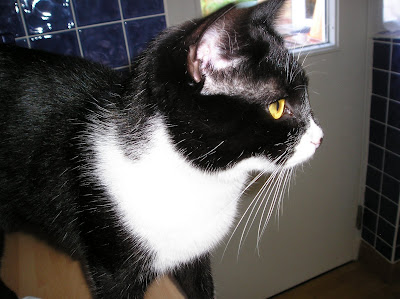 BACK FROM ME EUROPEAN TOUR! ;)

The wanderer returns... Not that you'll probably have noticed...

At any rate, I've been away for quite a lot of August on my little European Tour and whilst I was away I was doing a lot of the proofreading of my next collection of poems: THE SHY LIFE, which is due out in November. As it stands the book will contain, at least, 50 new poems - photos from my tour, the usual behind-the-scenes stuff about the poems themselves and information about my gigs, BLOGTV appearances and anything else of note: including all the links to any available content that might be on other sites.

My next proper gig is on Wednesday 16th September at The Poetry Cafe, Covent Garden from around 19:00 until about 21:00.

More information nearer the time - but for now I'll post up one of my newest poems which was inspired by my old friend Lee Freeman, with whom I worked a great deal with in the 90s on projects such as SUTTON PARK, ROLAND QUAVERALL, TRAVELLERS and CANDLEMAN. Wherever you may be now, Lee - I hope you get to read this one day...


My creative gnu,
He is there to advise!
There is none that I know…
Who is nearly so wise!
Yes, his knowledge is special...
Dare I say it, essential!
There's no doubt this gnu!
Has fantastic potential!
He's a creature of vision;
And that vision won’t blur!
He's the one who designed –
The brown bear’s booming grrr!
He’s the one who foresaw –
Last week’s new biggest hit –
And who fashioned instructions –
Which taught me to knit!
My creative gnu…
He is quite unsurpassed!
Tapping into his talents!
Cross your paws that they last!

My creative gnu –
My creative gnu…
He’s full of creations –
That are brilliant and new!
His ideas are the kind –
That can not be berated!
Yes, they’re clever and wholesome!
And never X-rated!

My creative gnu,
Is a wonderful beast!
So superbly inventive…
Once his thoughts are released!
His ideas can't be faulted!
They're always precise!
There's no doubt my gnu!
Whips them up in a trice!
Of his skills, oh so modest!
Not some arrogant boaster…
He's the one who invented –
The time travelling toaster!
The one who came up –
With vegetarian ham!
With the pocket-sized pie;
And with self-spreading jam!
My creative gnu…
He's a wonderful fellow!
His ideas should be bottled –
And captured in jello!

My creative gnu –
My creative gnu…
He’s full of creations –
That make you go WOO!!
His ideas are the sort –
That can not be insulted!
As he ensures that all cats –
Cannot be catapulted!

My creative gnu,
Really should be saluted!
He’s a force to be reckoned with…
Not a force to be muted!
With his grand master plan –
He will solve all our woes!
There's no doubt this gnu will be missed if he goes!
Such a great inspiration!
My dear pal, mon ami!
It is he who ensures –
That ham tastes really
hammy!
He’s the one who designed –
Buffalo underpants…
Bobble-hats just for moths!
Pogosticks used by ants!
My creative gnu…
There’s no end to his wonder!
It’s a talent to celebrate!
Which he knows not to squander!

My creative gnu –
My creative gnu…
He’s full of creations –
Brain waves that just grew!
His ideas are the type –
Only gnus seem to fathom!
I’m not sure how they do it!
I’m just glad that they have ‘em!

PS The photo of the top is of my friend Ceri and Becky's new cat George who has saved the day by illustrating this post as I don't have any pictures of my recent trip to hand. Perhaps George is my creative gnu... Except he's a cat not a gnu! Oh well, it was a thought!!!
Posted by Paul Chandler at Tuesday, August 25, 2009