As mentioned in my previous post, my new collection: CAVEMAN LOGIC is now available for £8.99 at: http://www.lulu.com/content/paperback-book/caveman-logic/5957268

I am busy with my next collection and have already written over half of it. In addition to this I have been blogging on a site called BLOGTV. I do a regular half hour show on a saturday morning between about 9.30-10.00. During the show I talk about what I've been writing and then record a ten minute section where I read between 3 and 4 poems. I've recorded 11 shows, so far - some from the saturday shows and some from short-notice shows and I've been reading a mixture of poems from CAVEMAN LOGIC and work-in-progress THE SHY LIFE, as well as reading some old favourites.

Following this are brief details on tests 8-10, with the poems that I recorded, commments and links to the actual videos. Once on the site you will be able to watch any of the other tests. You can also set up your own profile and do you own shows, although if you just want to watch the films you don't have to have a profile. The pictures at the top of the page are screen grabs from some of the shows.

READ: BRAND NEW PULLING PANTS, NOBODY KNOWS ANYTHING, OLD BAG FOR LIFE, ROBOTS AND WRONGUN’S - ALL FROM: CAVEMAN LOGIC (2009)

This show was recorded at around 9:45 on the 27th June 2009, but I broadcast for about 15 minutes beforehand and five minutes after – talking about putting CAVEMAN LOGIC on Lulu.com, which had happened just days before and also a little about working on GOSSIP FROM THE CHEESE COUNTER, the Mouse of Commons book that I was also completing at the time. Once started I read four poems from CAVEMAN LOGIC: BRAND NEW PULLING PANTS I had never read live, but had posted on my blog that week, NOBODY KNOWS ANYTHING I had read at my gig on March 1st 2009, when it was a very new composition. OLD BAG FOR LIFE and ROBOTS & WRONGUNS made their debut here. Having completed the broadcast I received a message from BLOGTV saying the recording hadn’t worked and so I began to perform it again. This time I got as far as OLD BAG FOR LIFE and the internet connection went down. Running out of time, at this point, I then discovered that the majority of the first version of the recording had saved and so I left it at that! Phew!!

This show was an unexpected recording – the day after TEST 8, recorded around 16:35-16:45 on a Sunday afternoon, although after advertising that the show was coming up on Facebook (which I had done with TEST 8 and some of the earlier tests), I also nattered for about 5 minutes before and after the recording. I hadn’t expected to do another recording until Saturday 4th July, but in the end found myself with some time to record another show. I decided to read two new poems from CAVEMAN LOGIC collection and 2 from SHY YETI RULES O.K. The only one of these four poems that had been read live before was SHE NEVER HAD ANY LUCK, which I’d done at a reading in Derby in April 2008 and which was originally from my 2002 collection: ROLLERCOASTER. REVOLUTION ON THE 8.15 was a poem that I had largely forgotten until I came to compile the SHY YETI RULES O.K. book and being about commuter nightmares it still seemed very relevant. It made its first appearance in my 2003 collection: GO 4TH & DIVIDE. As quite a few of my previous shows had been done without much announcement or as with TEST 5-7 before work, I had yet take notice of viewing number for each TEST and had forgotten that you don’t have to be a member of BLOGTV to watch. I was a bit disconsolate to discover no viewers (and had been the previous day with TEST 8), until I noticed on the other corner of the screen that I had a good half dozen viewers, which I was pleased with seeing as I’d only announced this TEST with about 10 minutes notice. Readers who have seen this particular TEST or have access to it will notice a cameo from poet’s inspiration - Kirk’s cat, Nightshade – who jumps on the bed at the start of THE LAST LOVE LETTER, wiggles her bottom around for a few seconds and then shoots off the bed again!! What a STAR!!

This show was recorded at quite short notice – with about a 30 minute warning on Facebook, one evening after work. It was recorded at around 8:45, although I logged on about 5 minutes before and discussed which poems I was going to read, mentioned Nightshade (who was also mentioned in the show itself and was sitting behind me on the dark bed spread and didn’t really show up! Having done the majority of the show with no live viewers I suddenly gained 3 towards the end of the show and so once I’d finished recording I went back and read RABBITS DON’T REALLY LIKE LETTUCE for a second time, but didn’t record that version. Of the 4 poems, 3 were from SHY YETI RULES O.K., but A LEARNING EXPERIENCE originally appeared in my 2002 collection ROLLERCOASTER. This has been a recent favourite of mine at gigs and open-mike nights. RABBITS DON’T REALLY LIKE LETTUCE comes from my 2008 book SHY YETI’S INCREDIBLE PIE-CRUST COLLECTION and I originally made it’s debut on my blog on Christmas Day 2007, whilst I WILL EAT PIES was included in my 2007 volume RHYMES BEARS STEAL PIES FOR... I read I WILL EAT PIES at my March 2009 gig, but made a bit of a cock up (although I’m not sure anyone noticed because I just kept reading anyway!) Still, it was nice to record it and not make such a bodge on this occasion. YOUR CAT LIKES ME SO MUCH made it’s debut here and comes from my most recent collection CAVEMAN LOGIC. 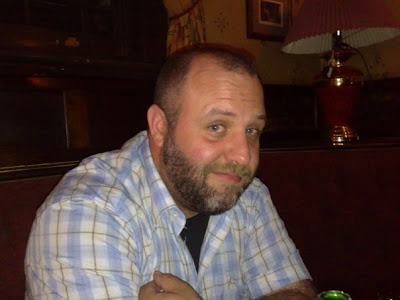