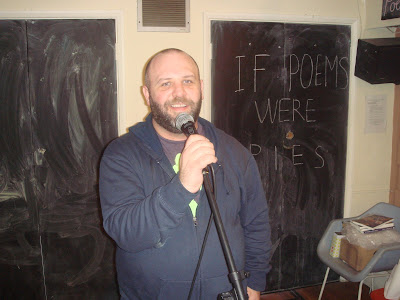 This is pretty much the order in which I read the poems – but I did juggle around the order a bit from the list that appeared in the programme, so it’s not 100% correct – but near enough and these are definitely all the poems I read. There was a last minute addition to the first half of the show as the previous day Kirk and I had help catch a thief in Romford (yes, really!) and so I read the superhero poem SUPER YETI AND COSMIC BEAR. I also read THE BALLAD OF CAUSEY HILL (as my flatmate, Calum inspired it and he was in the audience), A LIFE TOGETHER (for my friend Julie, also in the audience), ANOTHER PATHETIC ASSASSINATION ATTEMPT (for Nick, who came up to speak at the microphone about the origins of that particular poem) and finally THE DEPARTMENT OF SHODDY WORKMANSHIP (from CAVEMAN LOGIC for Kirk, who inspired that title).

In addition to this I really enjoyed the impromptu calling out of titles from IF POEMS WERE PIES that I did in the second half too and will hopefully do that next time.

YETI SPAGHETTI
THE TRUE LIGHT
I SHOULD NEVER
SUPER YETI AND COSMIC BEAR
THIRD TIME LUCKY
MY MOMENT IS NOW
A LEARNING EXPERIENCE
PARTY GIRL
SO MUCH LOVE…
PICCADILLY CIRCUS
LITTLE PIG
THE UNGRATEFUL VALENTINE
BLUE EYED LOVER
OH, FLORENCE!!
MY DOG IN A DRESS
INGRID BERGMAN’S NOSE
THE BALLAD OF CAUSEY HILL
WHO CARES?
ANOTHER PATHETIC ASSASSINATION ATTEMPT
A LIFE TOGETHER
SOMETIMES I JUST WANNA

I have already booked a slot at The Poetry Cafe for another gig on Sunday 6th September 2009, when I intend to launch the CAVEMAN LOGIC collection (if it's ready!!) I'm thinking slide-shows, powerpoint presentations, cupcake eating contests, bears dressed as Cher and dancing suet puddings - but we'll just have to see how far the budget stretches.

I'll be posting some more new poems from IF POEMS WERE PIES over the next few weeks and putting some more photos from the gig up too, most probably.

Thanks to all those who came along on sunday - I very much appreciate the support and an extra special thank you to Kirk. 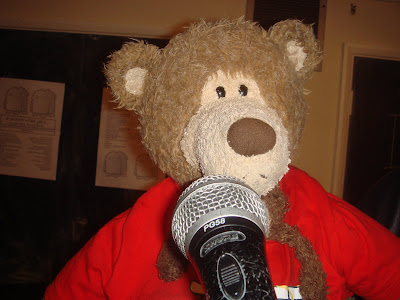 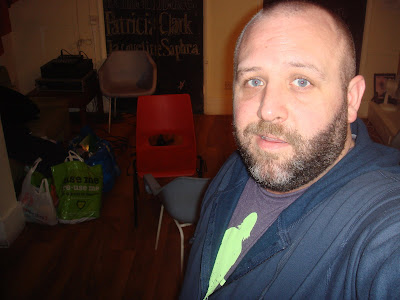